This lovely old building in Macclesfield had unfortunately been damaged by misguided attempts to repair it using modern building materials and techniques. Our task was to remove all the inappropriate modern materials and restore the building to its former glory. 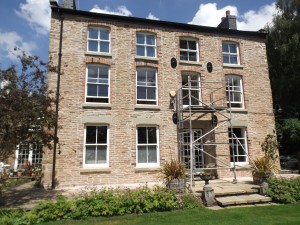 The brickwork had been painted using modern paint. This was preventing the building from “breathing” – i.e. moisture had become trapped in the wall under the paint, rather than being able to evaporate harmlessly away when the conditions were right.

The building had also been re-pointed using cement based mortar. Again, this is totally unsuitable for an old building, as it does not allow the building to breathe.

The entire rear of the building had been covered over with modern paint. All the bricks around the windows and the archways had been damaged by frost and the expansion of moisture trapped under the paint.

It was necessary to provide support for the building so that we could remove all the damaged brickwork. We  removed the bricks and replaced them with reclaimed bricks in good condition, pointed with breathable lime mortar.

The archways were also replaced as the previous a 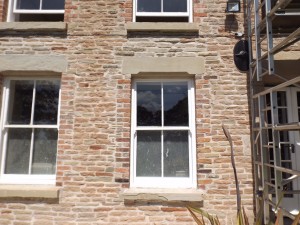 The cement had not only damaged the brickwork but had also caused the windows  to rot, because moisture was trapped next to the wooden sills. So these also had to be replaced, and painted with breathable paints.

The building is now as beautiful as it was all those years ago when it was first built.