These lovely old cottages were in a beautiful location on the edge of the Peak District.  Although the cottages still looked OK on the surface, the owner was struggling more and more to keep damp at bay. Plaster was falling off the walls, paint was flaking and rain was seeping into the bedroom of one of the cottages!

Unfortunately the cottages had been renovated using all the wrong materials: 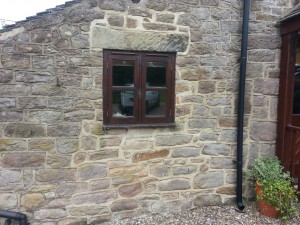 The ground levels around the cottages were also higher than those inside, meaning that damp could penetrate the stone walls.  And a “velux” style window had been badly fitted and was allowing water to penetrate.

Our first job was to rake out all the old cement based pointing. This can be a time consuming task, and you never know quite how hard it will be until you start. Some bits just fall out whilst others are so firmly attached it can be hard to get them off without damaging the stone work. 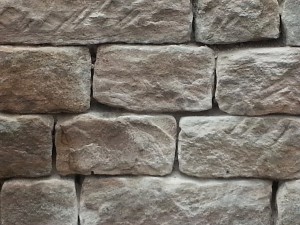 Once we had removed the old pointing, it was time for the lime! The cottages were repointed with a mixture of lime and local sharp sand. 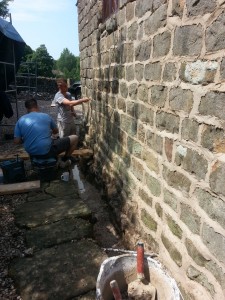 This was in the scorching hot summer of 2013, so we laid hessian over the walls while the mortar dried. The cottages looked very strange! The hessian stops the pointing drying too quickly and cracking. 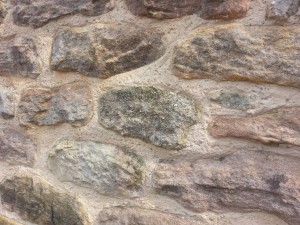 We also carried out repairs to the roof, dug down the ground levels and laid French drains, and replaced some leaking doors with new stonework. The cottages are now free from damp. They have been beautifully renovated and are currently in use as holiday cottages.